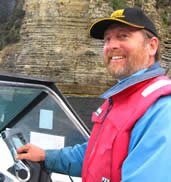 Co-owner of the Eaglehawk Dive Centre. Active diver for over 35 years, Marine Biologist, PADI Divemaster, Coxswain, TDI Gas Blender, Equipment Technician, First Aid and Oxygen Provider.
Video producer, with over 25 years experience as underwater video cameraman, video editor, underwater photographer.
Mick had 20 years experience as a scientific observer on national and international fishing vessels, operating in sub-Antarctic to tropical waters.
He has a keen interest in all aspects of the marine environment and is an active campaigner for local marine conservation.

Active diver for over 35 years, Marine Biologist working part-time for CSIRO Marine and Atmospheric Research, member of the Australian Institute of Professional Photographers (Master of Photography) and was recognised by the Institute as one of Australia’s leading female professional photographers with a special award in 2009.
PADI Divemaster, TDI gas blender, commercial diver, First Aid and Oxygen Provider.
Karen is an internationally recognised expert on marine invertebrates, and she has also won a number of national and international awards for her photography.
She was nominated for an Eureka Award for scientific journalism in 2001. She has written numerous scientific papers and popular articles on marine invertebrates, and in 2008 she published her book “A Field Guide to the Marine Invertebrates of South Australia”, and is currently working on a similar volume for Tasmania and Victoria.
Karen is a popular public speaker, giving illustrated talks and lectures on many aspects of marine life and the marine environment, for all levels from junior primary school to tertiary students, and to the general public. She was an invited speaker at OZtek09 and Oztek11. She has been involved with the Scientists in Schools program with several Tasmanian primary schools since 2009.